Are you someone who often engages in criticizing your friends, family and colleagues? Is the only thing that you focus on are the faults of people? Do you recognize the fact or have you been often told by others that you’re too much critical about others? If answered yes, this post is definitely for YOU! 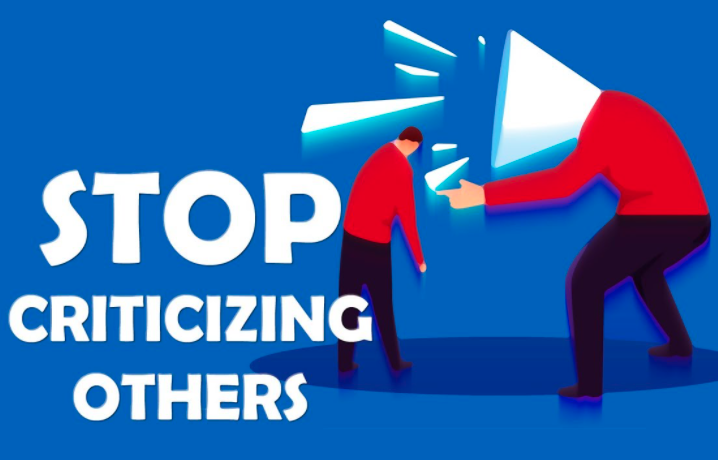 There are some people who actually find it tough to see the positive side of things and hence they keep on making negative comments about everyone around them and everything they see. The people on the opposite side usually hold on to their angry feelings unless they are not able to tolerate anymore.

Are you among those who are well aware of the fact that they’re critical and they want to change themselves? If you wish to bring about a change in this part of your personality, here’s help. Let’s analyze the things that make you critical and discuss ways you can stop criticizing others.

The potential problems of criticizing others

You have to understand that this part of your behavior is disturbing to others. If you actually don’t realize the problems of criticizing, here are few things you need to know.

Criticizing people, nagging about negative things and focusing only on what your friends and family are doing wrong will lead to damage in your relationships. The more you criticize, the more it erodes your communication and connection with others.

It is demotivating to criticize. People who criticize think that criticism will get their kids, spouse and employees to change themselves but it doesn’t. For instance, if a mom sees her teenage daughter getting herself another cookie, and says, ‘Better watch what you eat.

I’m never gonna buy you a new pair of jeans if this don’t fit’. This criticism is never again going to encourage her to eat healthfully. She will feel angry, ashamed and never feel motivated.

One more reason why criticism will never work is that it never addresses the deeper roots of your relationship. When you criticize others, this might be a reflection of the fact that you are in internal pain or anxiety. Others will think that you are trying to control someone or something so that you can feed in to your ego.

Have you heard of the phenomenon called negativity bias? Negativity bias is when you focus only on the problems of something or someone rather than the positives. Do you find yourself biased towards finding the misdeeds and faults of your spouse? Do you tend to overemphasise his faults rather than his good deeds?

If you keep on cribbing about the fact that your husband leaves his dirty socks on the floor, this will only irritate him and cause a rift in your relationship. You will also gradually become unhappy as you’ll start feeling guilty for your overt criticisms.

Why does criticism make you feel better?

As we are social creatures, we usually pay attention to what others speak about us. Negative and positive assessments play the role of a social currency.

They either hurt or boost your chances of ascending the social ladder. In fact, as per what anthropologists believe, gossip has always been a good way of bonding with peers. People tend to isolate those people who don’t fit in their group.

Gossiping plays a vital role in the society. With the help of gossiping, people either ostracize or welcome other individuals. There are some who say that it safeguards the weaker individuals of any group. It has also been said by the researchers that majority of the negative gossips are never intended to hurt the targeted person but to please the receiver and the gossiper.

Though it is sad but true, we look ugly when we engage ourselves in criticising others. Irrespective of our motivation, gossiping will hurt relations and create an aura of resentment and fear.

In fact, there are several studies that reveal that criticism will lead to a decline in productivity and can even increase absenteeism and illness. Involving in constant gossiping will create a fully toxic environment both at home and at work.

Put a stop to criticizing – The tried and tested ways

If you are someone who is perennially disappointed by a person’s attitude or behavior, it is better you adjust your anticipations from the person. If you are not able to do that, you will constantly feel irritated about that person.

Watch out for the ways in which you can focus on the good things and then acknowledge it. Research reveals that it will take at least five good comments to reverse the damage that is caused by one negative comment. So, now you know how to bridge the gap.

People tend to make lots of mistakes, they get tired and over-committed. There are several reasons for the behavior of your friends and family and those have no relation to you. Always assume the best regarding the choices of someone and not the worst.

You have to remember that you won’t get what you ask for but when you ask for your needs respectfully and directly, this will increase the chances of fulfilling your needs. So, instead of criticizing your spouse for some unfinished task, calmly ask him/her to explain the matter to you.

Criticism is not always about what others are doing. You can handle your criticism by tackling your anxiety through a combination of medication, psychotherapy, journaling exercise, medication and nutrition. The more stressed you are, the more you will tend to criticize people.

Therefore, if you’re someone who is immensely critical about others, you should bring about few changes to your personality by following the above mentioned tips and strategies. In case you need help, you may even get in touch with a counselor who can give you a professional approach about adopting a realistic attitude towards life.